The competitiveness is defined as “the fact of being able to compete successfully with other companies, countries, organizations, etc...
Cost competitiveness of BIPV components and systems 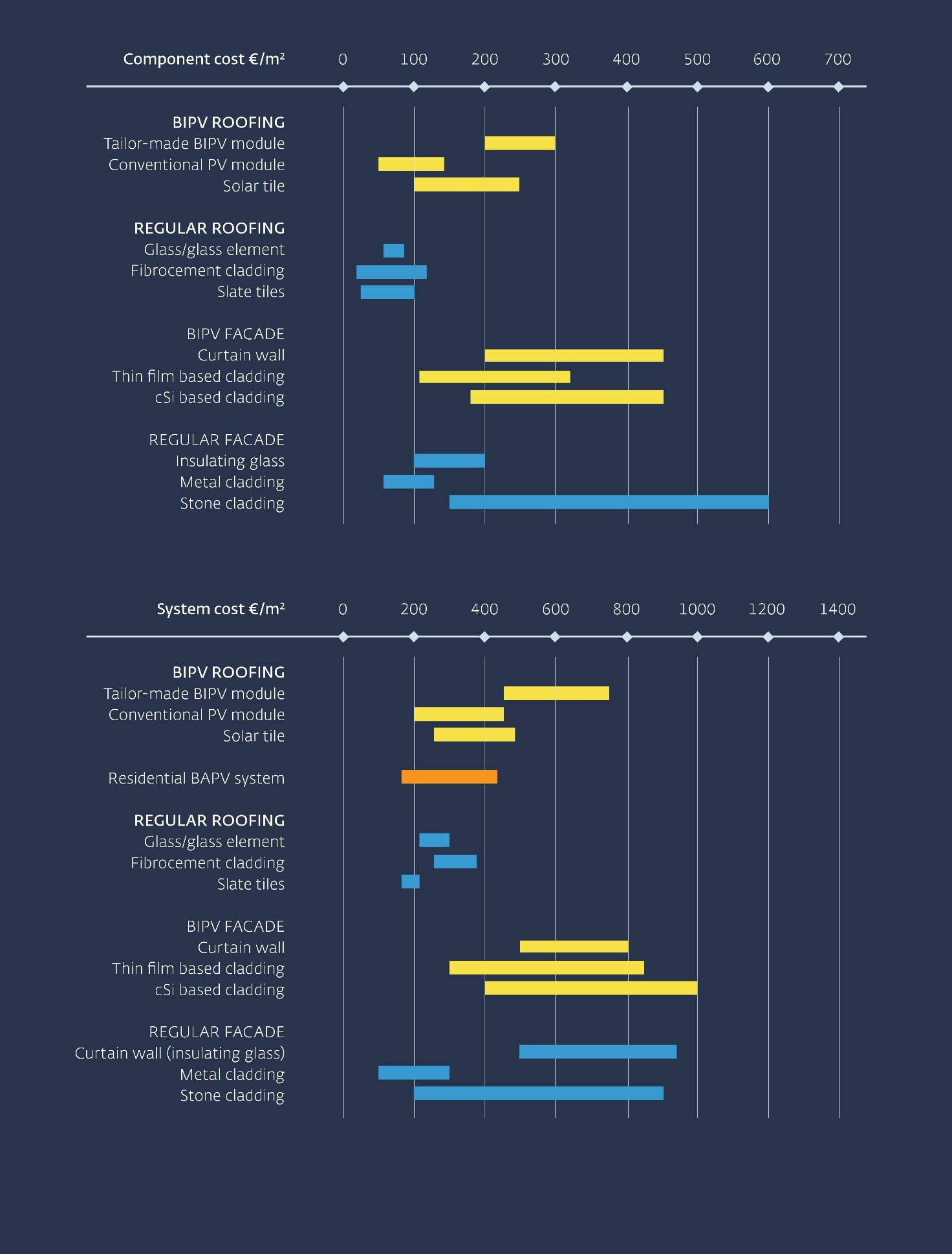 Component cost of BIPV and regular roofing and façade. More details within the BIPV Status Report.

Competitiveness as construction system
The cost of BIPV and regular (non PV) systems are compared. BIPV system’s cost refers to the end user cost of the BIPV-based building envelope solution as a whole. This includes the BIPV modules (the outer layer of the building skin used as cladding), as well as the other anchoring and mounting parts of the related building skin system, ensuring the complete functionality, safety and performance/normative compliance of the construction kit. Globally, similar trends as for the component cost comparison can be observed, even though the gap has diminished for facade solutions. Conventional roofing and facade solutions can be challenged by BIPV solutions. Taylor-made BIPV roofing are more expensive than a conventional tiled roof but often provide the advantage of a better aesthetical integration and building-related functionalities. BIPV systems can even be competitive when compared with some conventional systems, but are especially on the same level of competitiveness with high-end systems, such as glazed warm facades or stone opaque claddings. This result is understandable as the additional functionality of BIPV (electricity generation) compared to a conventional system is logically associated to an extra cost. 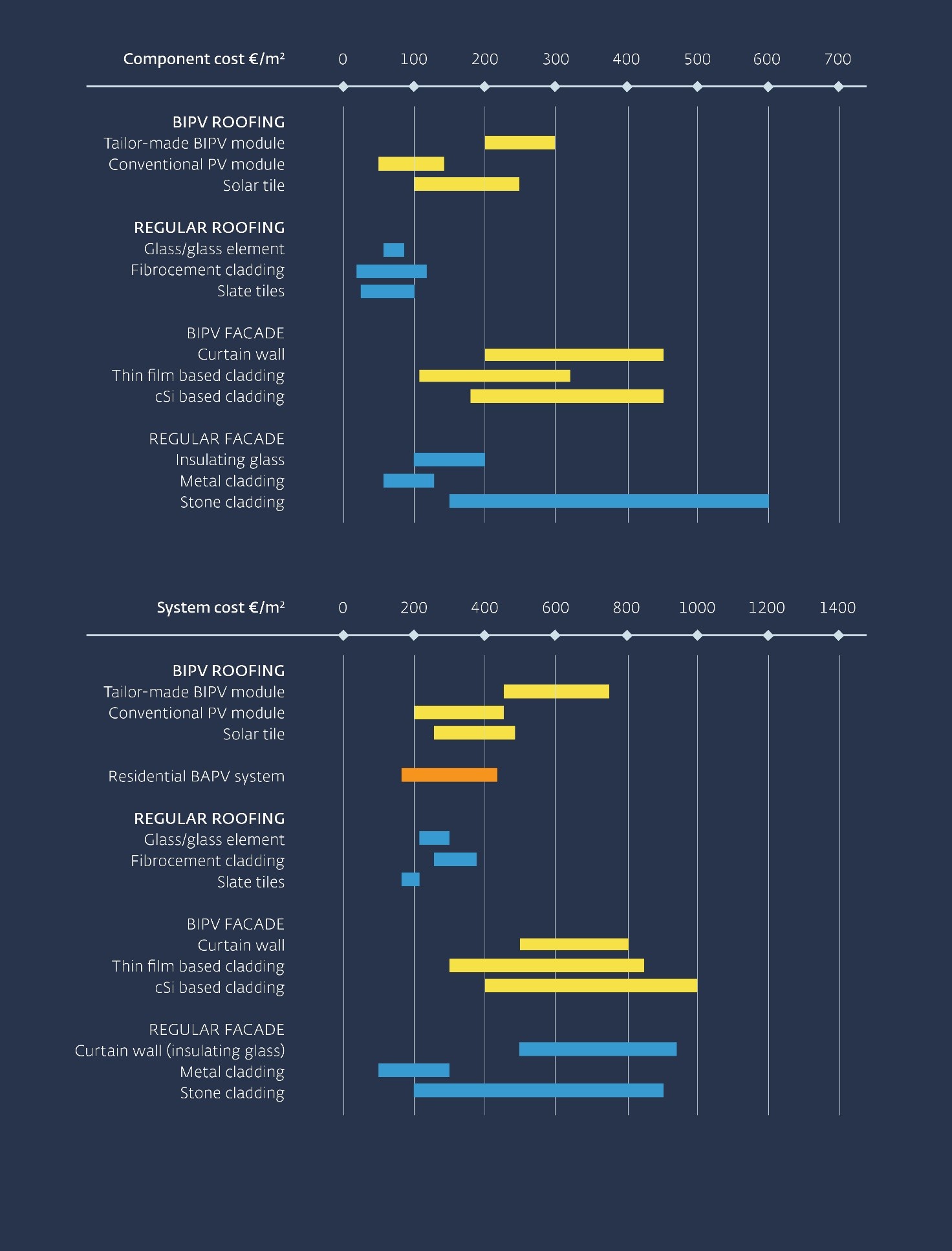 System cost of BIPV and regular roofing and façade. More details within the BIPV Status Report.

Project-based approach
The difficulty to combine economic, energetic and architectural aspects can be deterring, especially for those who approach BIPV for the first time. Especially the economic aspect is still perceived by many as a barrier that limits the spread of BIPV systems, because of their higher upfront costs. Even though in reality if the cost competitiveness is calculated taking into account a project-based approach and considering the entire value created on its useful lifetime, the extra cost, compared to conventional building envelope solutions, can be covered by the additional revenues linked to this unique “active” material.
A holistic project-based evaluation of the economic attractiveness of BIPV solutions consists in an analysis of all cash flows generated by a specific project, allowing to obtain an estimation of all costs but also all revenues associated with the BIPV systems on their operational lifetime. This type of competitiveness is called “total cost and revenues of ownership”. Indeed, such business model based on the valuation of the generated electricity, including a part of incentives when possible, represents the typical business model applied to BIPV installations [2][3]. It is important to highlight that these competitiveness assessments focus exclusively on values that can be quantified. However, other values linked to aesthetics, multi-functionality and environmental aspects, which are key advantages of BIPV, exist. These values can be a cornerstone of on-site renewable energy production, thus contributing to building stock’s decarbonisation. Although, these values cannot easily be quantified, as they are partially subjective or not easily accountable. Hence, they are not generally part of the cost competitiveness evaluation.

Schematic view of the determination of the extra cost of BIPV. More details within the BIPV Status Report.