The Coop Group's administrative building on Thiersteinerallee, located in the city centre of Basel, was built in the 1970s by Gass+Boos Architekten...

Joos Sutter
Chairman of the COOP Executive Committee
``A complete renovation of a high-rise office building in operation is like open-heart surgery.``
The energy turnaround

The Coop Group’s administrative building on Thiersteinerallee, located in the city centre of Basel, was built in the 1970s by Gass+Boos Architekten and was completely renovated in 2020. The renovation did not interrupt the administrative services and was aimed primarily at making the best possible use of the outer shell of the building preserving the exterior concrete structure. The qualities of the existing building’s interior, the column-free floor plan and well-proportioned usable areas, were retained and optimised in certain areas. By redesigning the office space, room for about a third more workplaces was created.
The facade elements between the columns in concrete were completely renewed. They now produce electricity as photovoltaic elements form the parapet cladding and emphasise the layered effect of the facade.
Well integrated into the 1,600 m2 facade of this administrativ building, the 158 kWp photovoltaic system generates 69,800 kWh/a. This covers 6% of the 1.21 GWh/a consumed by the building itself. 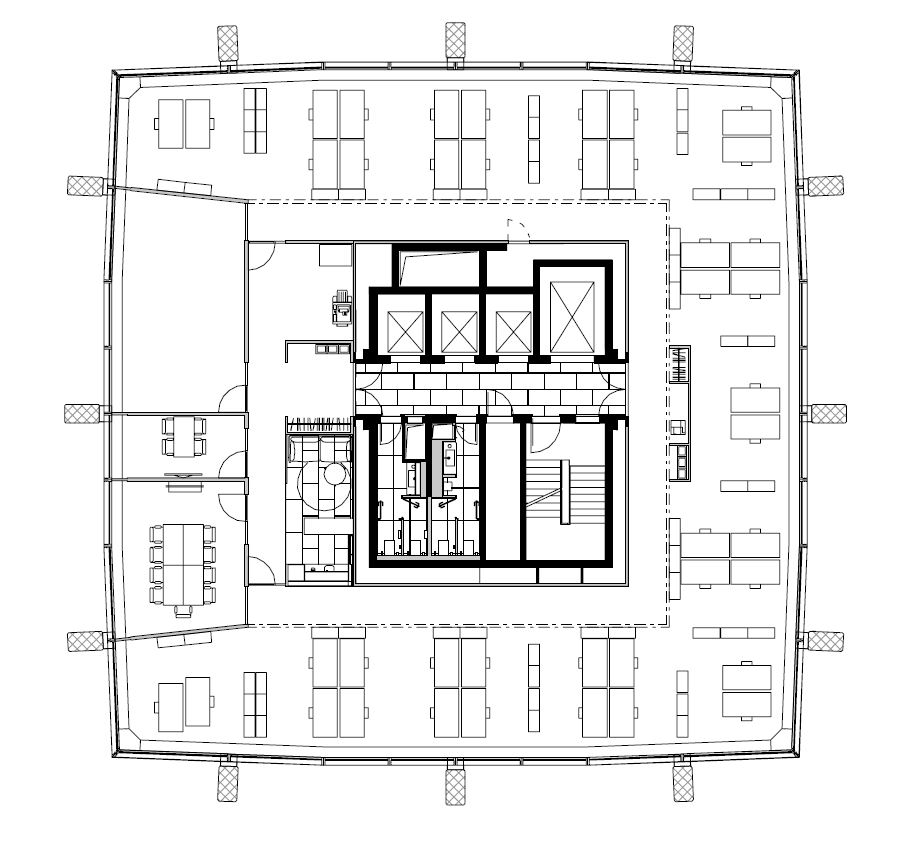 The building has an open floor plan and a core housing technology and services. 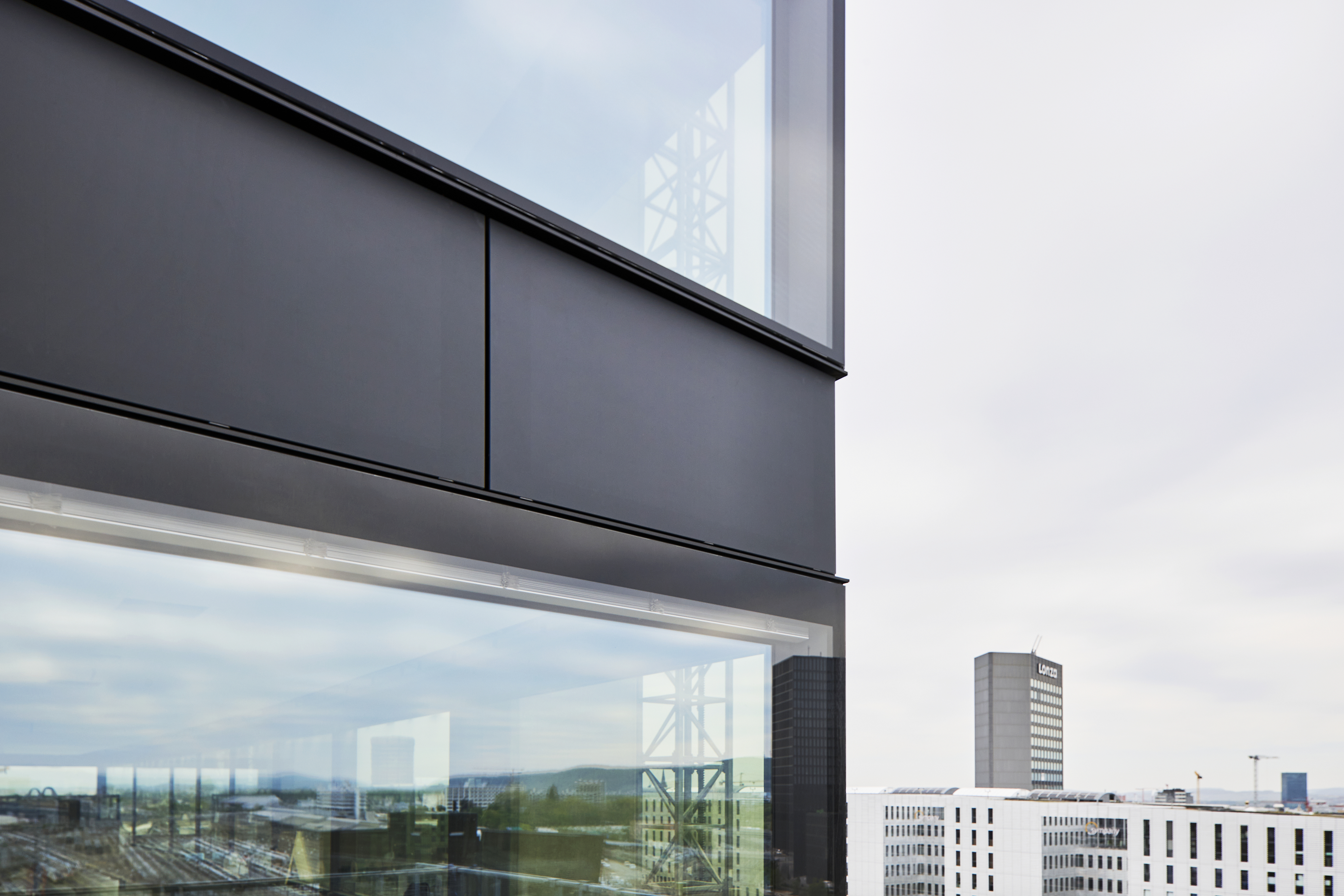 Photovoltaic elements from the parapet cladding. 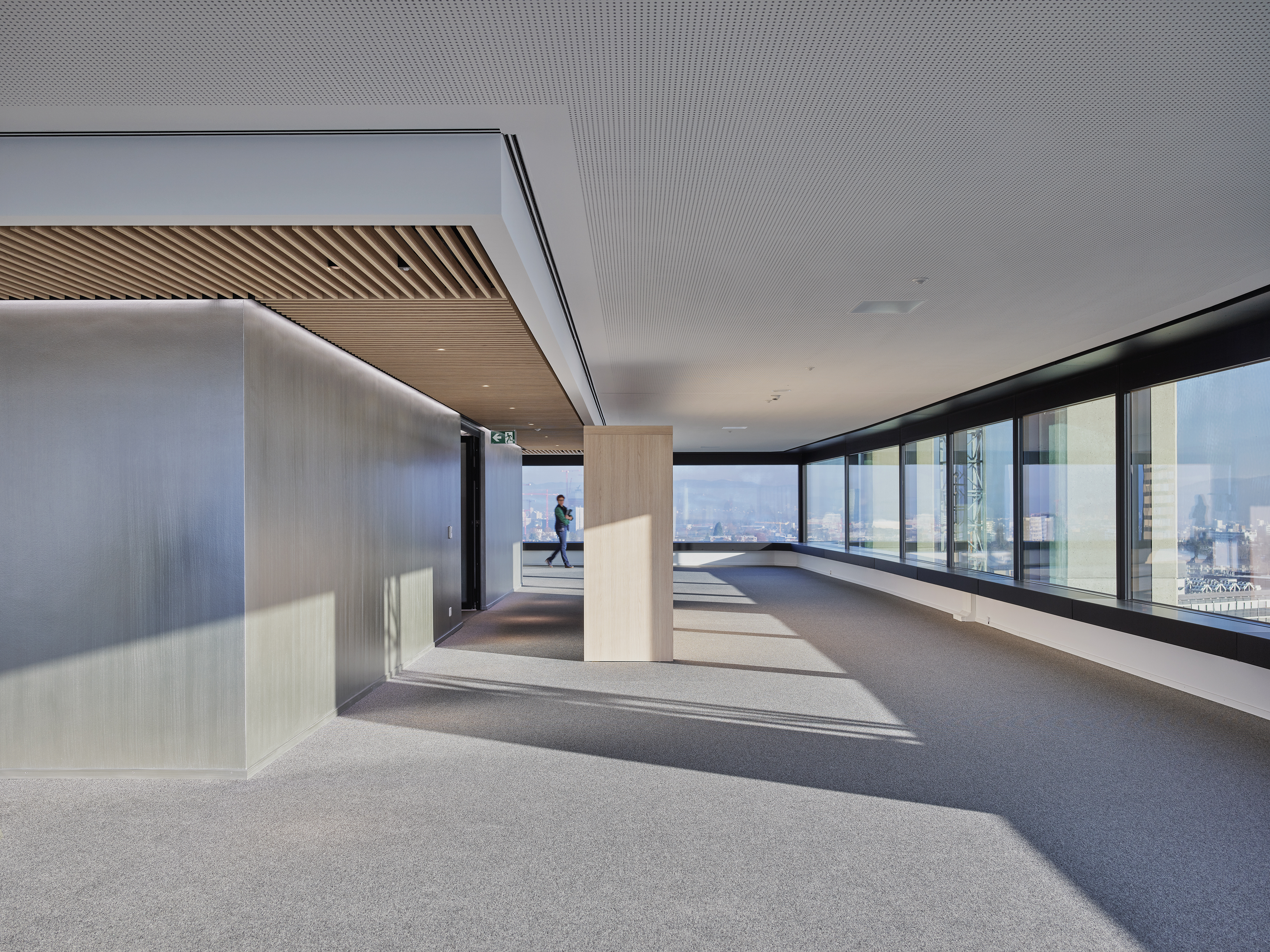 Architect Samuel Schultze
Chairman of the Executive Board of Burckhardt+Partner AG
``It was important to us to deal with the existing architecture in a sensitive and respectful way.``
Energy
Energy production
0
kWh
Source: Solaragentur, Schweizer Solarpreis 2021
Self-consumption
100%
Self-sufficiency
6%
Building skin 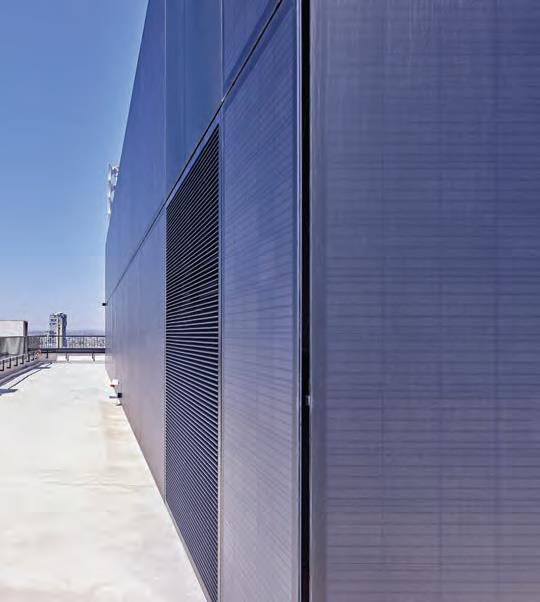 Detailed view of the PV modules on the facade of the Coop building. Source: Solaragentur. 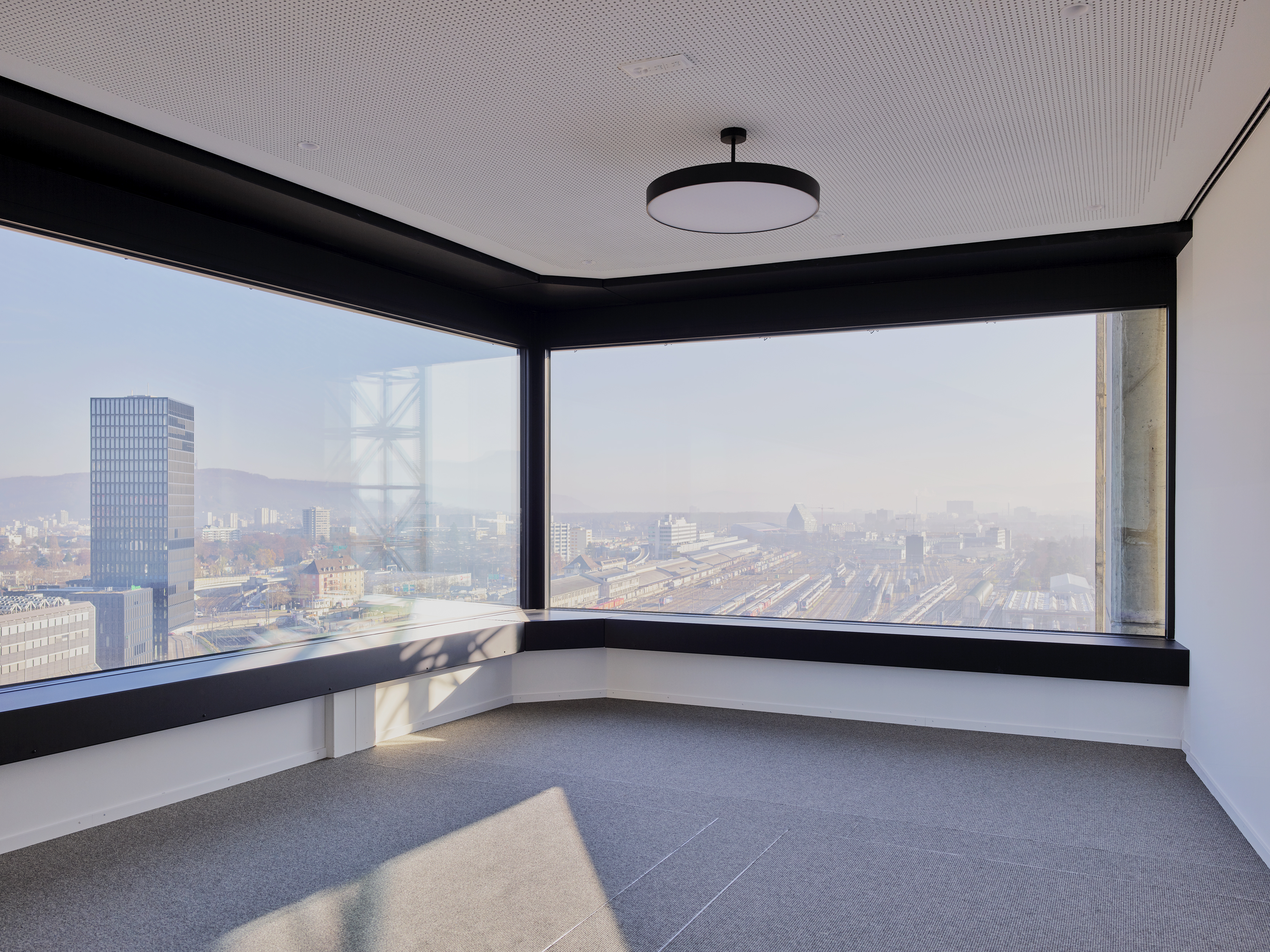 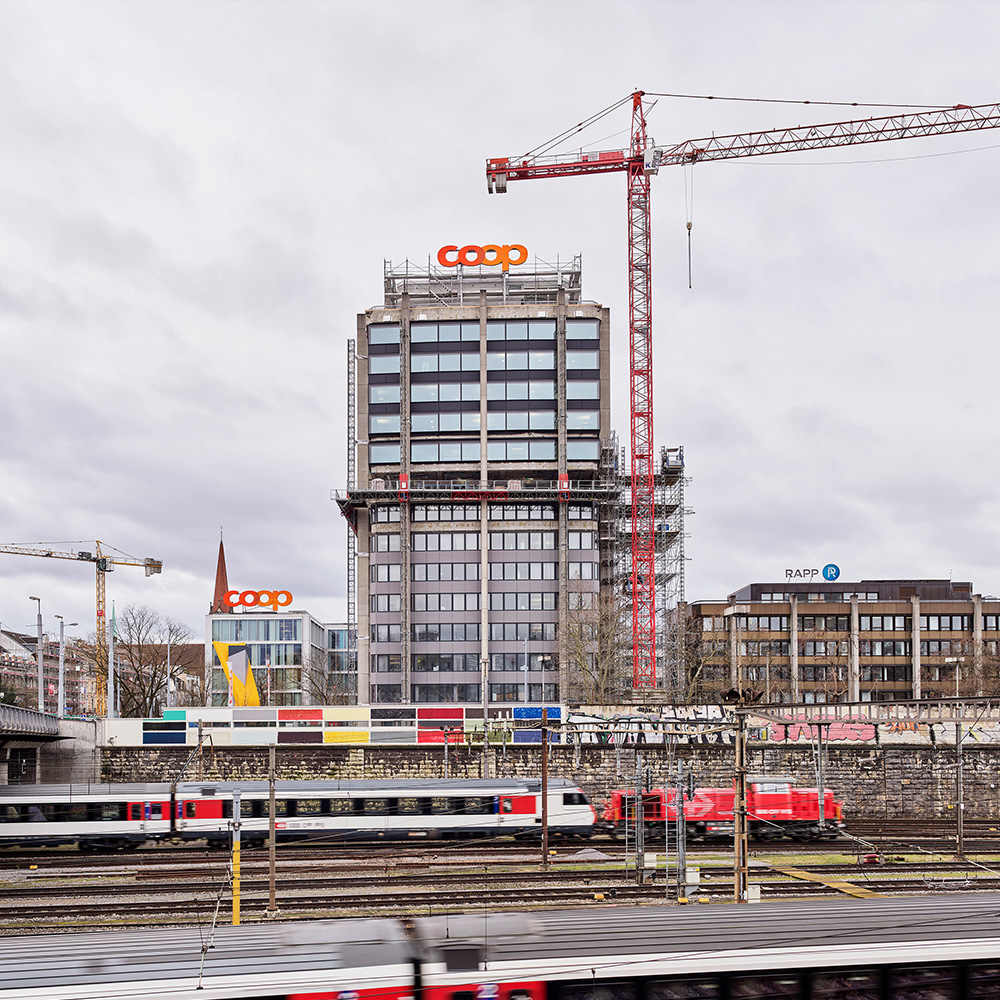 The retrofit was carried out while the building remained fully occupied and functional.

Aim of the new design was to create a convincing interplay between the preservation of the character-defining elements such as the exterior concrete structure, the technology and a contemporary architectural language. For these reasons, it was chosen to clad the facade elements between the columns in concrete with custom-made photovoltaic modules that completely conceal the PV technology. The modules are integrated into the facade using the MEgasol FAST 2 facade system which is fixed to the vertically laid substructure made of aluminum L profiles. Depending on the requirements, the spacing of the vertical substructure is between 40 cm and 80 cm. 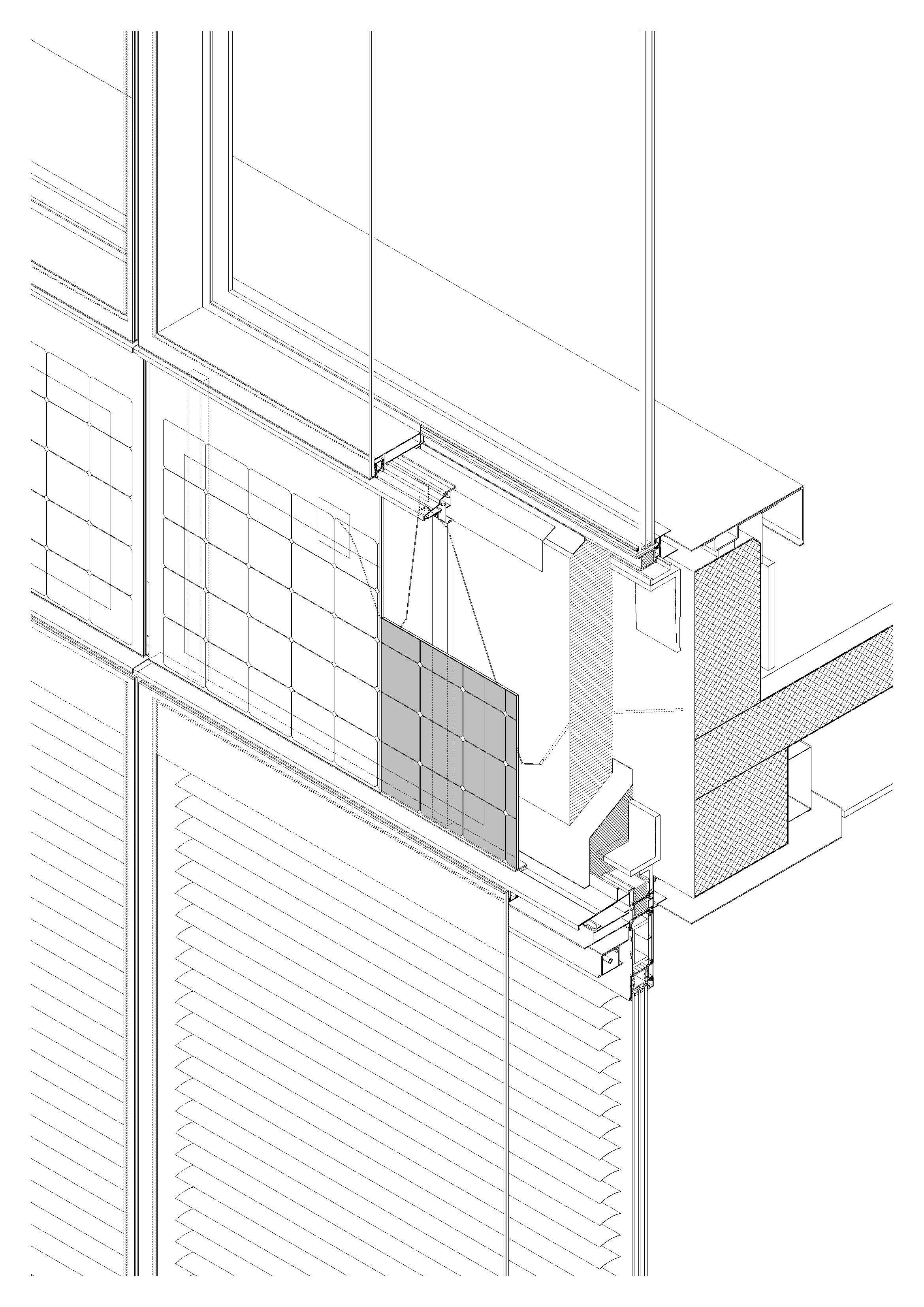 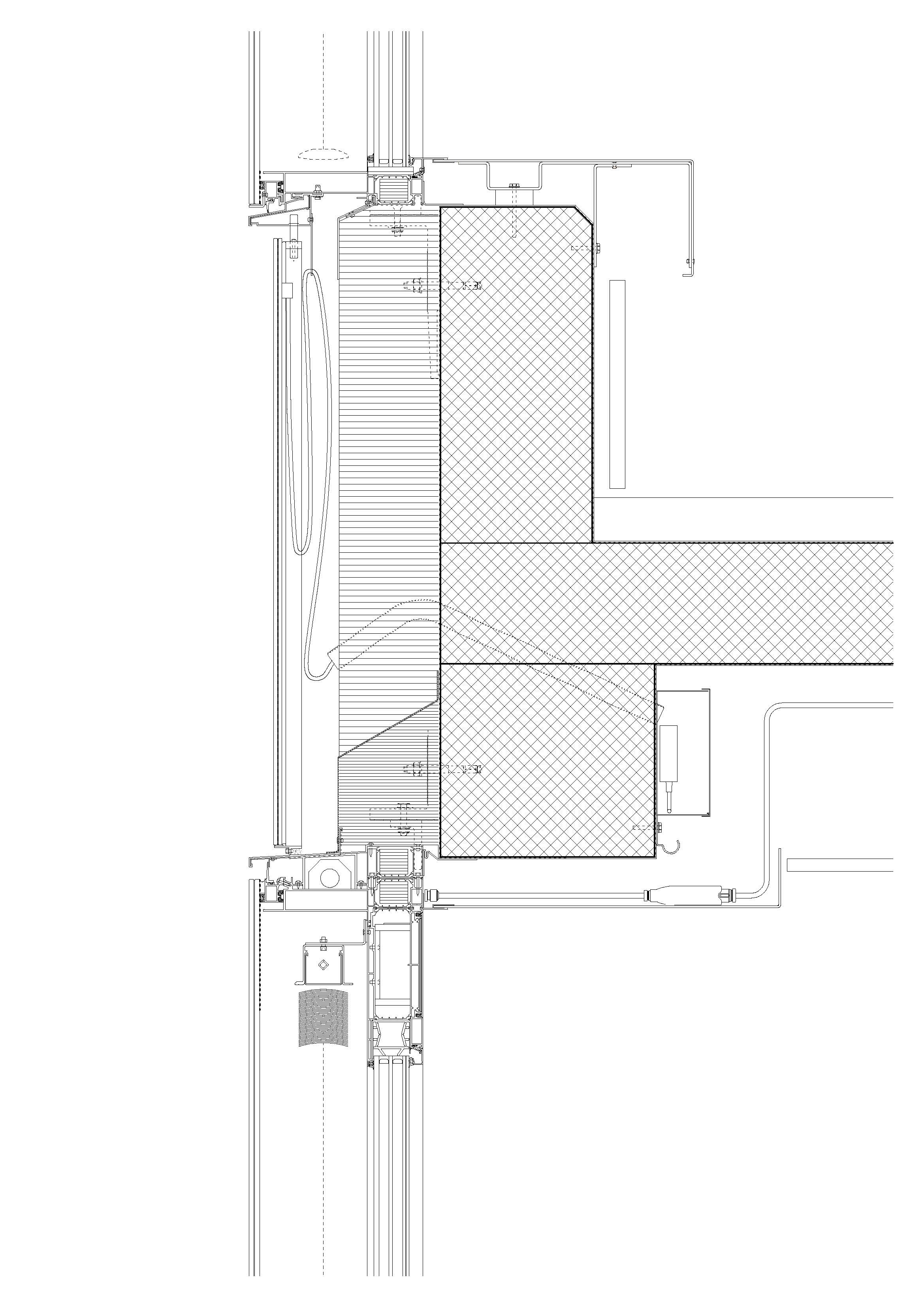 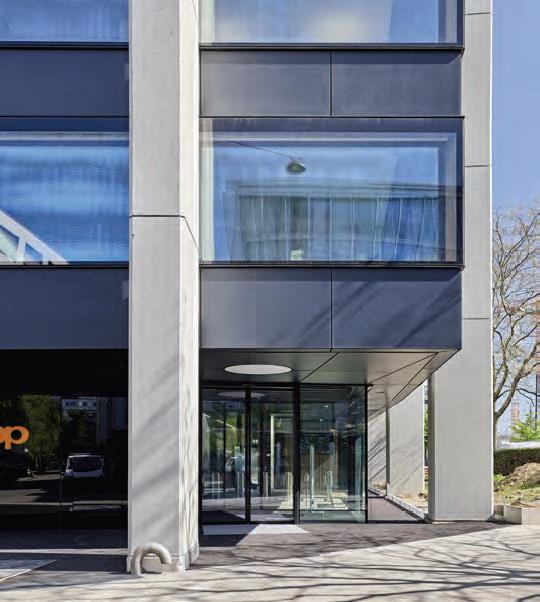 The photovoltaic modules blend smoothly with the concrete structure of the building. 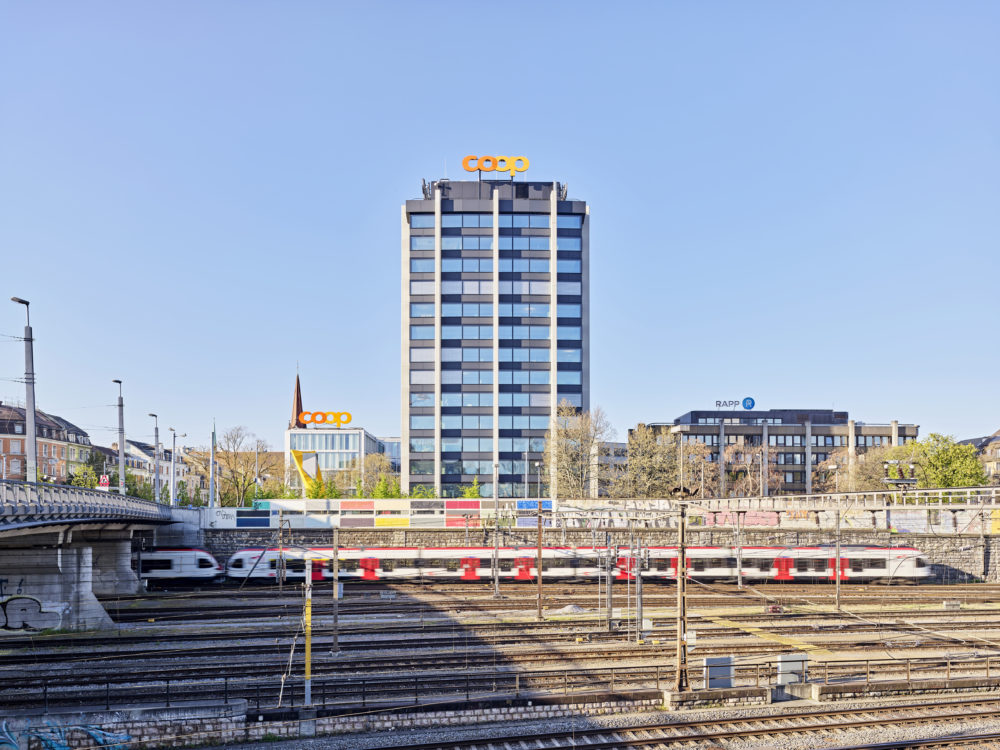 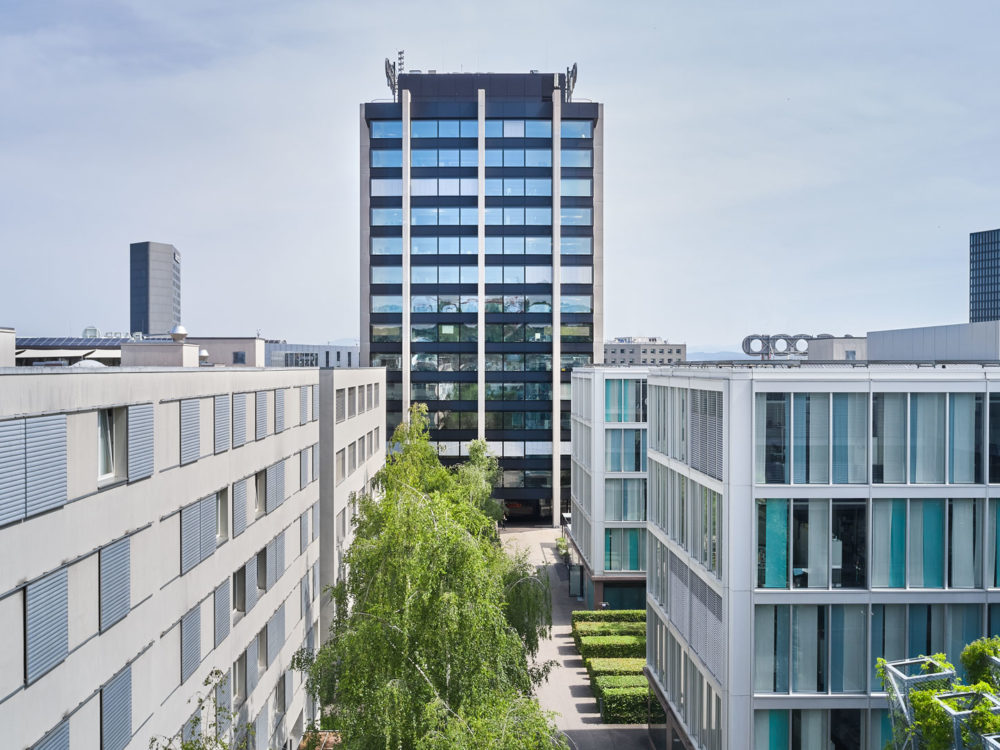 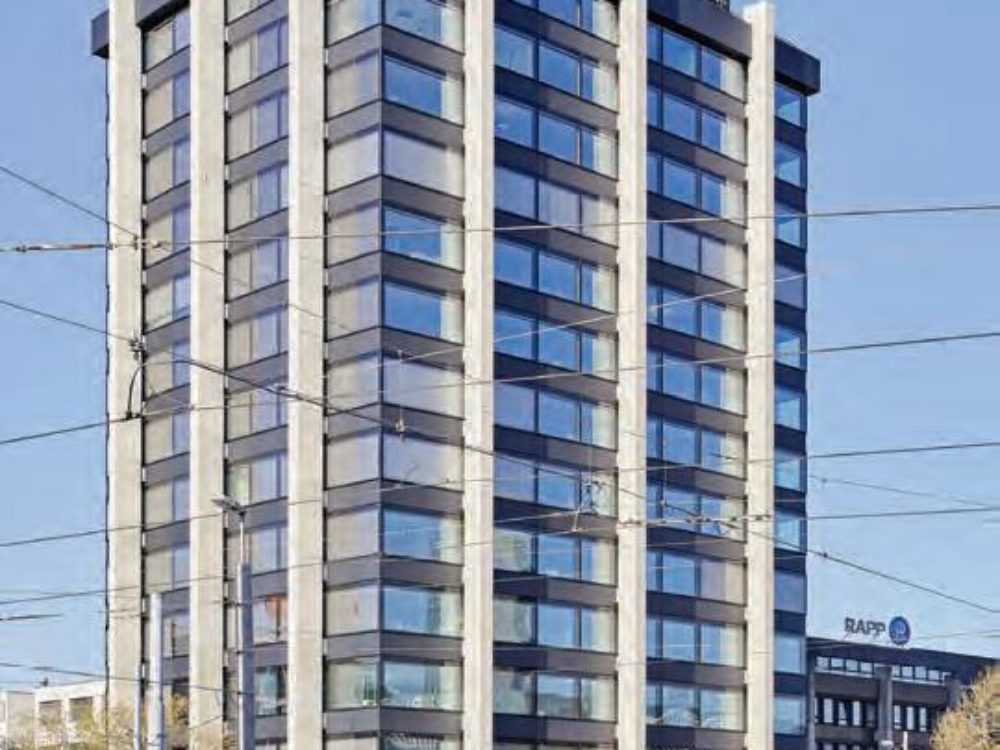 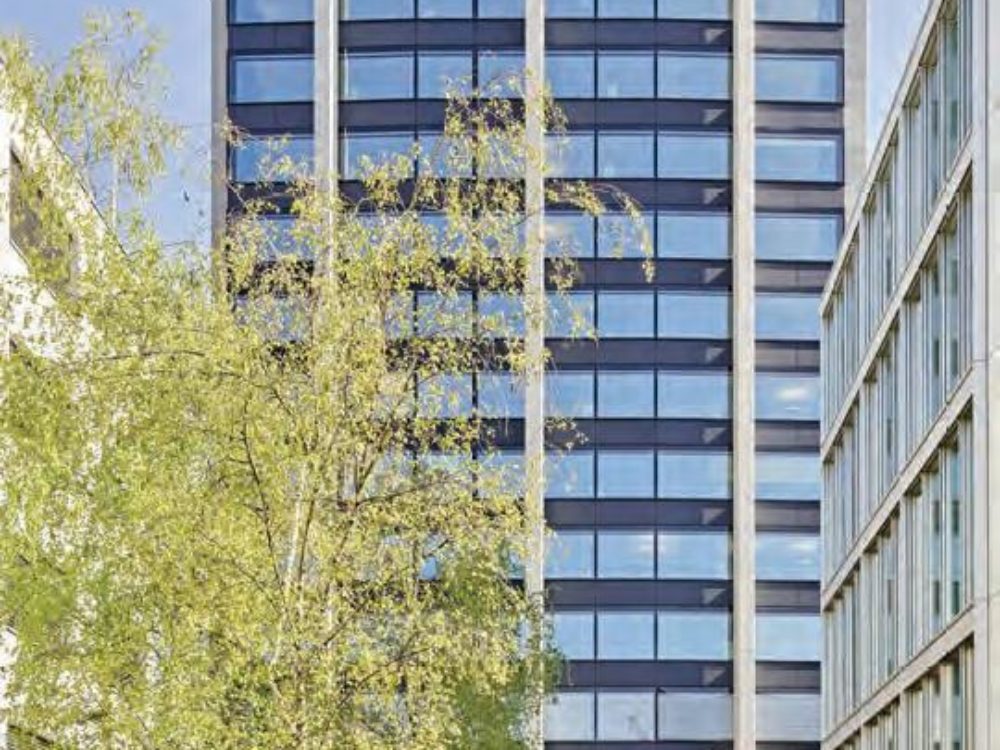 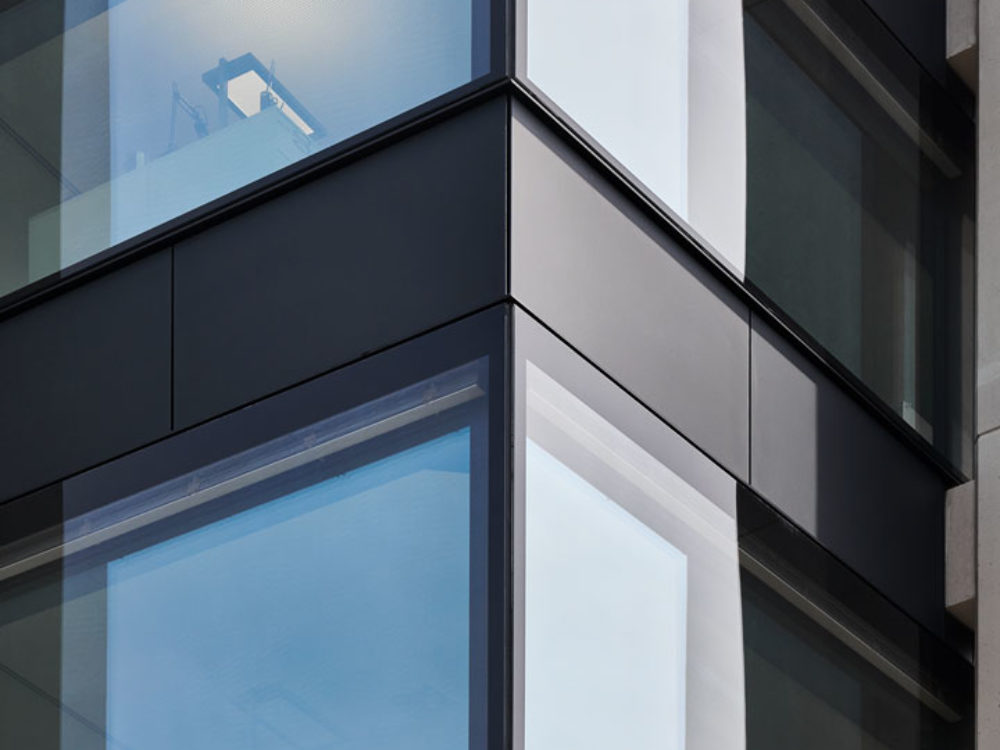 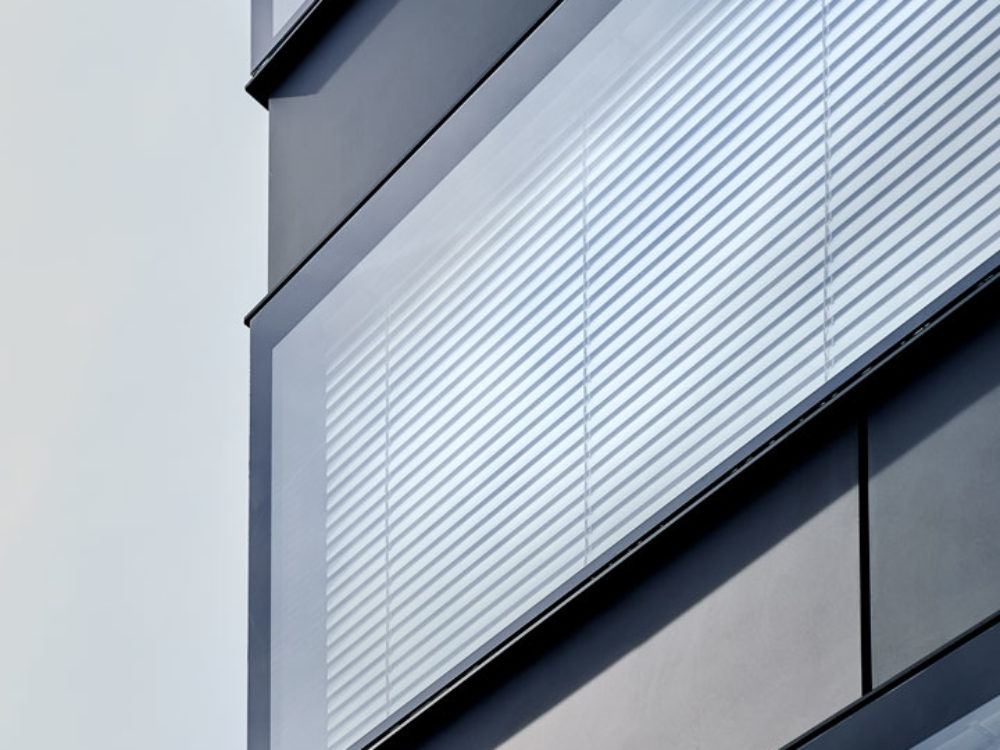