To optimize the production of solar panels, one of the most investigated aspect is the relation between solar yield with orientation...
Which is the optimal surface for solar installations?

To optimize the production of solar panels, one of the most investigated aspect is the relation between solar yield with orientation and inclination. The optimal inclination to exploit the maximum solar irradiation is mainly a matter of solar geometry: it depends on the latitude of the location. But is it solar design just a geometrical problem? If for conventional solar installation it is so, the issue for building integrated solar technology is not about maximizing the amount of energy: it is about designing a dynamic building envelope ensuring on-site renewable energy generation to make the building nearly-zero or plus-energy.

Orientation: can the North side also be productive?
The orientation of the solar surface affects the amount of received sunlight and therefore the energy generation. At our latitudes, south-facing elements receive the most sunlight, and consequently the most solar energy throughout the day. For that reason, to maximize the energy produced during the year, the orientation of the plant should align with the south as much as possible. Even an orientation between south-west and south-east guarantees an interesting result with losses not exceeding 10%. Moreover East-facing panels increase energy production in the mornings while west-facing do the same late in the afternoon. On the other hand, for mere energy purposes, a northerly orientation of the panels is normally to be avoided. On the other hand, north-east/west orientations can also contribute to energy generation. Hence, is it really suitable to limit solar installations to southward orientations? 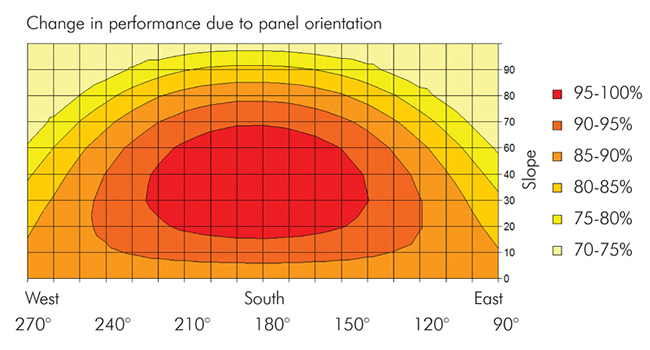 Further the orientation of the installation is from the south, the more its production will be affected. Source: unknown.

Tilt: are vertical installations efficient?
Solar panels will produce the maximum amount of energy when the sun is directly perpendicular to them. Throughout the year the azimuth of the sun changes, in winter the sunlight is low, so panels need a higher tilt to capture as much light as possible while in summer, due to a higher azimuth of the sun, the performance of solar installations is very good also with solar plants that have a low inclination.
Solar panels installed vertically produce less energy at central-Europe latitudes. For BIPV systems mounted vertically on the facade, the efficiency is about 70% if facing south, while it will drop to 50% if facing east or west. So, does a facade installation still make sense energetically?

The modules should be mounted with an optimum inclination between 10° and 60°. An orientation between 60° west and 60° east guarantees however an interesting result with losses not exceeding 10% (depending on the inclination).

Solar roof or solar facade, where is the best solar potential?
At our latitudes, the maximum annual incident solar radiation is achieved at a south orientation and with a 30° tilt from the horizontal plan. However, not all roofs and facades have optimal orientations for a peak-power production and this is not the scope of the decentralized energy production in the built environment. The answer to the previous two questions is that it is energetically and cost effective to install solar technology on “different” orientated building elements (e.g. west-east facades or flat roof) with the scope to increase the benefits of self-consumption by increasing the matching between the solar production profile and the load consumption profile. Instead of focusing on a partial approach aimed at pre-selecting the most favorable surfaces, an analysis of the energy self-generation and of the building energy management system is essential to make the most of the solar potential.

Solaris 416: The whole building envelope has a homogeneous appearance thanks to glass elements used as cladding and tiles. Both the facade and the roof are fully covered with photovoltaic elements where the front layer is a laser printed brown glass that hides mono-crystalline silicon cells. Credits: Huggenbergerfries Architekten AG

With the support of

The copyright of any material created by the author is reserved. Any duplication or use of objects such as images, drawings or texts in other electronic or printed publications is not permitted without the author’s agreement. The author reserves the right not to be responsible for the topicality, correctness, completeness or quality of the information provided.